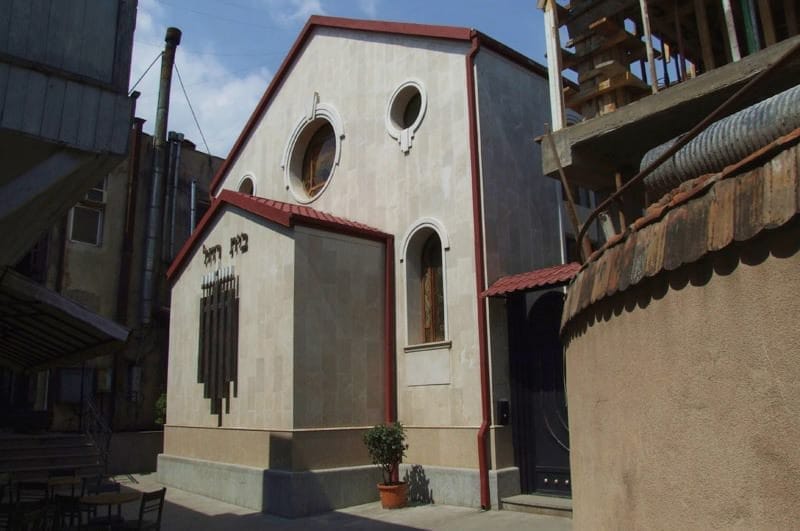 Beit Rachel Synagogue (aka New Synagogue, aka Russian Synagogue) is located in Old Tbilisi, not far from Great Tbilisi Synagogue. Coordinates: 41.692703, 44.806291.
The synagogue is located at 13 Kozhevenny Lane (on some maps – Kozhevenny Dead End or Tkavi 1 Dead End). Finding her is hard. The lane is located in a semicircle behind Kote Abkhazi Street. Therefore, you need to go along Kote Abkhazi to number 28, and there are as many as three such numbers. In front of the left one is an arch with a Hebrew sign leading to Kozhany Lane. You need to go into it and the synagogue will be on the left side.
Ashkenazi Jews began to settle in Tiflis after the Russian Empire annexed Eastern Georgia in 1801. Most of them were shoemakers, hairdressers and artisans.
The exact date of construction of the building is unknown. It is believed to have been built in the early 1900s.
After the Red Army invaded Georgia in February 1921, the Bolshevik government ceased all Zionist activity, imposed economic restrictions, and generally discriminated against the Jewish community. All synagogues in the city were closed. A mass exodus of Jews to Israel began. The building of the synagogue in these years was very dilapidated.
The situation of Jews in Georgia improved dramatically after the end of the Soviet occupation, when, after the collapse of the Soviet Union in 1991, Georgia declared its independence.
The Euro-Asian Jewish Congress took up the reconstruction and repair of the synagogue.
In the process of repair, it was necessary to strengthen and rebuild the walls, foundation, roof, change wooden structures. It became possible to add a lower hall and the building became two-story.
In the lower hall there is an ancient Aron ha-Kodesh, which is almost 150 years old. On both sides of the Aron HaKodesh, there are beautiful vases in which plants are placed on the Shavuot holiday to decorate the synagogue.
Outbuildings were added and a male mikveh was built – a room in which ritual ablutions are performed (the female mikveh is located in the Great Tbilisi Synagogue).
The synagogue has a kolel – an educational institution for married men.
A separate entrance is provided for women, through which parishioners enter a special wooden balcony, which rises four meters above the main hall.
The interior and decoration of the synagogue, the colored Jewish-themed stained-glass windows in the windows and the wall cladding make a great impression. Every year a sukkah is placed in the courtyard, adorned with fruits for which the land of Israel is famous.
Now the synagogue is a two-story trapezoidal house. The height is about nine and a half meters, the thickness of the walls is impressive, in some places it reaches one meter. The building is oriented to the south, towards Jerusalem.
The renovated temple was inaugurated on September 15, 2009. The sacred Torah Scrolls were brought into the building, which has historical and architectural value.
The new synagogue is named after the mother of Alexander Mashkevich, the president of the aforementioned congress, which generously sponsored the revival of the spiritual life of the Jewish community in Georgia. In addition to him, there were many others – both in Georgia and abroad. The names of the people who provided the most significant assistance are immortalized on the walls of the synagogue.
Every day, a minyan gathers in the synagogue – for Shacharit at 8:00, and for Mincha and Arvit – depending on the time of sunset. The synagogue has siddur with transliteration in Russian. The Aron HaKodesh contains 2 Ashkenazi and 7 Sephardic Torah scrolls.
On Shabbat Divrey Torah, Georgian and Russian are spoken. Kiddush is held in a narrow circle, mainly for Jews who live far from the synagogue and rent hotel rooms near the synagogue for Shabbat. There are many hotels around for every taste and budget. There are no guest rooms in the synagogue itself.
Not far from the Beit Rachel synagogue, in the building of an old domed synagogue, there is Museum of the History of Jews in Georgia.