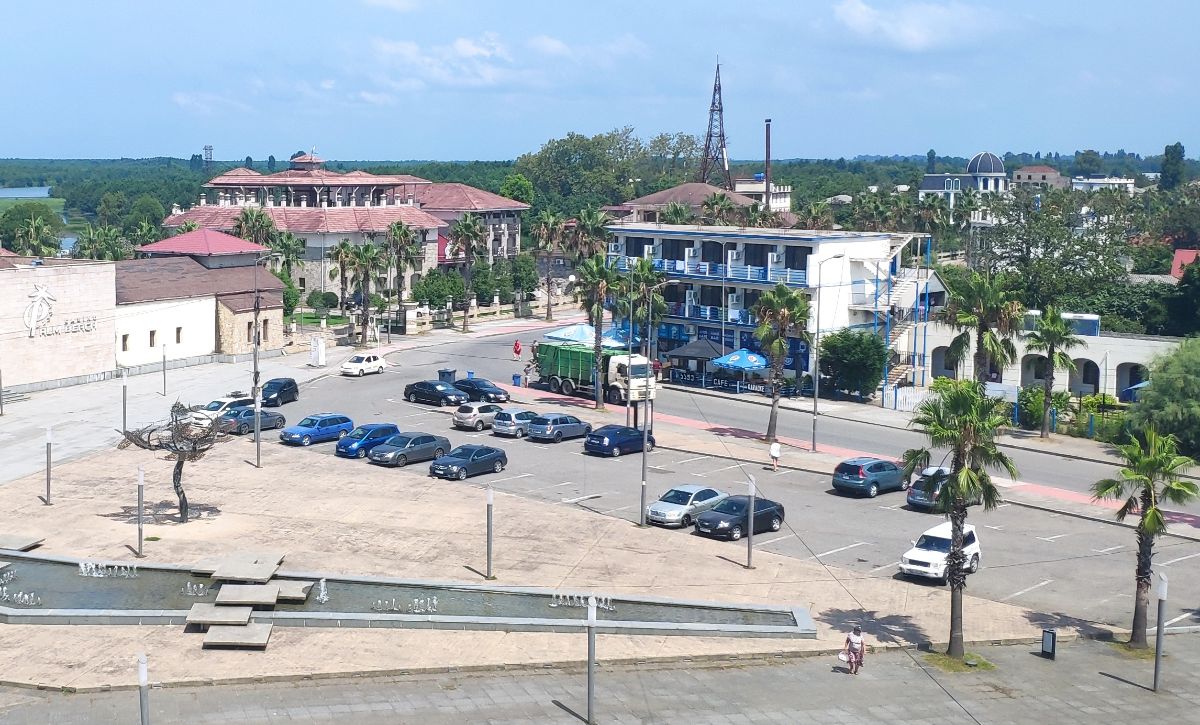 Anaklia is a small village in western Georgia on the Black Sea coast, which would be unremarkable if it were not for the witnesses of the past grandiose plans that now rise, randomly scattered along the coast, and give it a peculiar charm and appearance.
According to Saakashvili’s plan, a city with half a million people was to grow here, the basis of which would be the seaport – the Lasika project. Work on its construction had begun, and a huge amount of money had already been poured in when Saakashvili’s party lost the election and the project was curtailed.
But even before that, at the beginning of the 21st century, the construction of a resort began, which was named after the adjacent village – Anaklia.
The Spanish architect Alberto Domingo was invited here, so the streets of the sleepy seaside town quite unexpectedly turn into a resort geometry.
So, what can be seen and seen in Anaklia.
The central street of Rustaveli, along which you enter Anaklia, rests on a square with peacefully murmuring fountains.
On the one hand – a promenade with fluttering palm trees, on the other – the Inguri River flowing into the sea.
A wooden bridge by the German architect Peter Waltz flaunts across the Enguri. A very successful building is one of the foundations of the face of Anaklia. Its length is 540 meters and it connects Anaklia with the village of Ganmukhuri.
The bridge offers beautiful views of the sea, as well as the mouth of the Enguri, where there are many birds on snags – egrets, night heron, ducks, bitterns, wagtails, and ibis began to appear. Herons spend the night on the tops of the trees of the nearby island and stand out beautifully with their snow-white plumage against the background of greenery.
An amazing structure rises near the bridge, similar either to a station for aircraft, or to an alien flower. In fact, this is a restaurant, unfortunately not working.
This amazingly shaped tower looks unexpectedly good against the sea at any time of the day and serves as a permanent place for photographing.
Vacationers divided the rest by the sea into “before the bridge” and “beyond the bridge”.
The place to the bridge is more well-groomed. There are more people here. You can rent sun loungers and umbrellas, there are stalls, cafes nearby, and in general it’s not far to go.
On the same side there are hotels of different levels, an abandoned Chinese house and a yacht bay with overgrown access to the sea.
Immediately after the bridge there are usually fewer people and the rest here is, as it were, more “wild”.
More people become only at the end of the beach, where it is convenient to drive cars. There are changing rooms and showers.
On the same side is the water park. A ticket to it is bought for the whole day. You can not bring food with you, only buy already on site.
There is also a boat on this side of the hill. It is well preserved, and, with due care, you can walk on its deck or go down into the hold itself. A ladder is even attached to its board – that is, it is fully accessible to those who wish.
Even further away is the beach volleyball stadium. And even further – a large open amphitheater with a very decent stage. Spectators sitting facing the stage simultaneously see the width of the sea and it is very beautiful.
Concerts are held here, sometimes very interesting. For those going to the concert, I recommend taking mats, because the benches for the seats are concrete.

And then the beach rests on the border with Abkhazia. Back in 2008, shells were exploding in this quiet place and military planes flew by with a loud roar … Now you can approach the ribbon, which means the border area, which you cannot go beyond.
If you take a walk from Anaklia towards the failed Lazika, then after crossing the canal you will first find yourself in a swampy area with a completely passable and passable dirt road, you will pass a small settlement and find yourself in the place of the failed port.
It is a space devoid of land. All of it was torn off and folded in neat shafts along the sea. Now they are picturesquely overgrown with herbs and resemble hangars. Dust storms sometimes appear in place of bare land. Local residents have been turning to the authorities for many years to resolve this issue, but to no avail.
And then interesting constructions begin again.
The first is an abstract figure 31 meters high. It rises on a pier out to sea and looks great from any direction.

Nearby is a recreation center, and behind it is a rather secluded area with several cottages and a wild coast.
The second building, the purpose of which is impossible to guess, is the House of Justice, as well as the city hall for the future city. A road is laid to it, picturesquely framed by palm trees.
And hundreds of concrete “crabs”, which were supposed to strengthen the coast, became a strange decoration of all this diversity.
They are lined up in rows or heaped in heaps, overgrown with trees and grasses, they are entwined with brambles and lizards bask on their sides.
It is so quiet here, and the sight is so unreal that it is worth coming here. It is about 7 km from Anaklia. And after 14 km – the port city of Poti.
But it is impossible to drive there because of the indented coastline. The road to Poti is only through the city of Zugdidi – the administrative center of Samegrelo-Upper Svaneti. Thus from Anaklia to Poti 67 km.
The beaches in Anaklia are pebbly and sandy. The entrance to the sea is on pebbles, but after a few meters there is already sand under your feet.
The sand is gray, volcanic, similar to the sand in Ureki. Therefore, here the sea water does not seem transparent.
The climate in Anaklia is subtropical, but mild, with less rainfall than in neighboring cities. The generously falling dew nourishes the grasses, so even at the end of summer you will not see withered grass here.
Thanks to the refreshing wind, even in the very sun you can hide in the shade and wait out the heat, and hot nights are rare here.
It happens that tropical showers with thunderstorms fly in, usually short and spectacular.
There are few shops in Anaklia and they are all located on the main street. Products in them are sold with a resort margin, so local residents and those who rest longer travel 12 km to the village of Darcheli, where there are chain supermarkets and small shops, or to Zugdidi – 30 km.
You can get there by blue bus number 24 – the fare is 1 lari, or by a white minibus for 2 lari. Blue buses run on schedule, white ones, as it were, too, but they may be late.

Housing in Anaklia is for every taste and pocket. From rooms in the houses of local residents to 5-star hotels with swimming pools. There are cafes and restaurants.
Water is drunk here from taps. But there is a good spring. Its coordinates are: 42.396041, 41.575581.
The water initially gives off a little hydrogen sulfide, but it quickly evaporates. The taste of the water is soft, the water flows cold and the bottle immediately “fogs”.
There is also a bakery in Anaklia – it is located to the left of the road, towards the sea. Tandoor bread is delicious, crispy and always fresh. GPS: 42.395687, 41.566559.
In Anaklia, it is good to walk along the adjacent streets, past the picturesque Georgian houses framed by gardens. Unusually attentive cows and frisky pigs will pass by you. On some you can see wooden triangular collars – so that the pig does not climb into the Skoda or the drainage pipe.
It is very good to walk along the Enguri. Lush greenery on its banks, green meadows, a quiet current – all this has a calming effect. In Enguri people fish, especially in the area of ​​the bridge.
For those who want to take a long walk, there is an opportunity to go through places reminiscent of the jungle. Here you will see water meadows, lakes, many canals, birds and grazing buffaloes – powerful beautiful animals with chic horns.
On the way to these places there will be huge eucalyptus trees. There used to be a lot of them here, but in the hungry 90s, most of them were cut down for firewood.
The road will wind and the views will change frequently. So you will reach the forest – a real, dense, impenetrable forest. But the road will lead further and lead to the sea – to where Lasika was supposed to grow. From there, along the coast, a direct path to Anaklia. This route is about 18 km long.
The atmosphere in Anaklia is relaxing. After a few days, you can forget what day of the week or date it is.
Most vacationers are Georgians. It’s quiet and slow here. The main noise is fireworks during weddings, usually held at the Palm Beach Hotel by the river.
In Anaklia itself, on the main street, there are abandoned administration and club houses. But the police building is operational and the police are regularly seen in the city.
There is also service 112 here – its tower and building are located near the river.
Lifeguards walk in red clothes, there are quite a lot of them, and they are carefully on duty on the beaches.
Anaklia arose on the site of the Greek colony of Heraclea. In the XV-XVIII centuries, having already become Anaklia, it was a fortified port of the ancient Mingrelian principality, and in 1723 it became a trading port of the Ottoman Empire.
In 1770, this land was conquered by Russian and Georgian troops and became part of Imereti. It was from Anaklia in the 19th century that the Russians forcibly exported the Circassian (Adyghe) population. 400 thousand people were killed, about half a million were expelled. Of these, only 180,000 survived. The Circassians died not only as a result of battles – the tactics of the Russian troops consisted, among other things, in depriving the highlanders of water and burning their fields. In 2012, a monument to the victims of the Circassian genocide was opened in Anaklia. GPS 42.395533, 41.565142.
Also in Anaklia is a ruined Turkish fortress from the early 18th century. So little is left of it that the missing details are supplemented by a very large, simply unprecedented, pebble.
The fortress is located in the courtyard of the Palm Beach Hotel on the banks of the Inguri. Her yard is quiet and cozy. The wires are strewn with swallows. The GPS coordinates of the fortress are 42.393385, 41.561655.
A bridge is thrown from the fortress to a small island, which can be seen from the bridge. The island has its own atmosphere. It is flat as a saucer and shaded by tall trees. There are mosquitoes on the island.
Generalization: Anaklia is a resort with a good climate, for a quiet holiday.
Here you can stay for three days or for a month. Everyone fills his own world.