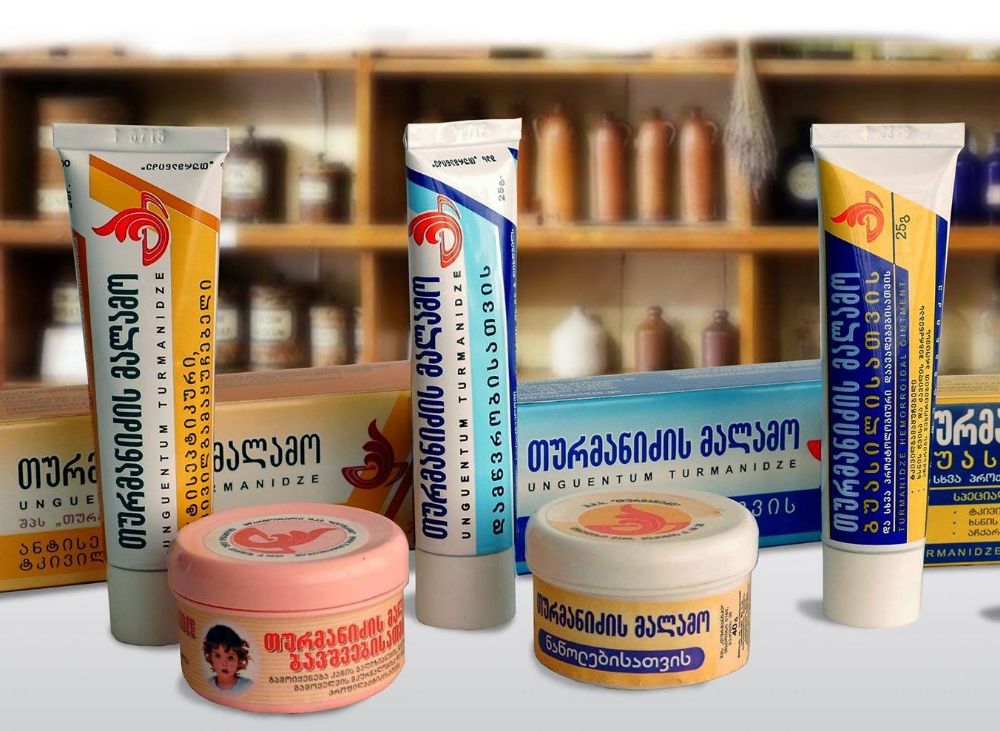 Turmanidze is a well-known Georgian family brand. It comes from the names of healers mentioned in the historical documents of Georgia since the 11th century.
For many centuries, the consequences received from wounds and burns were healed by the miraculous properties of Turmanidze ointment. This ointment has been used in Georgia for centuries to treat cuts, burns, bedsores and frostbite.
During the Russian-Turkish war, the wounded soldiers of Serbia were saved with Turmanidze ointments. During the Kakhetian uprising of 1912, the healing agent cured the seriously wounded romantic poet Alexander Chavchavadze. Healing ointments saved the Italian national hero Giuseppe Garibaldi’s leg, which doctors were going to amputate. Among many grateful patients, director B.A. Pokrovsky, who was treated for a long time and unsuccessfully for a severe form of furunculosis. Then Zurab Turmanidze was invited to Pokrovsky and completely cured the famous director with his miraculous ointment.
The environmentally friendly and safe composition, the absence of chemical additives in it, practically excludes the possibility of developing allergic reactions. There were no cases of overdose, contraindications and side effects.
The composition of ointments includes only natural ingredients, plant extracts and oils. Clinical trials have shown that Turmanidze ointment and its plant components have anti-inflammatory, antibacterial, antiseptic and analgesic properties, stimulate skin regeneration and epithelialization, which contributes to the rapid healing of wounds.
Ointments “Turmanidze” can be used for any type of skin and at any age. They are freely available in the pharmacy network throughout Georgia and are produced in packages:
* Yellow – antiseptic ointment used for skin lesions (wounds);
* Blue – for burns of varying degrees; (solar, thermal, radiation, chemical)
* Yellow-blue color, in tubes with a special tip – against hemorrhoids and other proctological diseases.
* In a white jar – from bedsores;
* In a pink jar – against diaper rash of babies and babies.
The Turmanidze clan has long been famous for its healers.
Malakia Turmanidze was the first folk healer who was officially allowed by the Soviet government to practice medicine. He was summoned to Moscow and shown several patients. Somehow he separated those who were incurable and cured the rest in a few weeks. He returned home with a document authorizing healing, but treated him carelessly, and so considering himself a folk healer.
Malakiy chose his son George as his successor, and he became the first certified doctor in the family. He was engaged in clinical research of the ointment, but at the beginning of the Second World War he returned to Tbilisi, where he began working in a hospital.
The founder of Turmanidze Plus LLC was the grandson of Malakia Turmanidze, Zurab Turmanidze (born 1937), a surgeon with half a century of continuous medical practice, a corresponding member of the Military Medical Academy of Georgia since 2000, a surgeon at the Alexander Aladashvili Clinic in Tbilisi, member of the international European Commission of UNESCO on traditional medicine.
The Tbilisi dynasty kept the secret of making it a secret for many centuries, and earlier it was only possible to buy ointment from them at home.
After the establishment of Turmanidze Plus LLC, the ointment was successfully produced in a small enterprise. But from January 1, 2022, the requirement for pharmaceutical companies to comply with GMP and GDP standards came into force in Georgia. Turmanidze plus LLC says that they do not have the funds to re-equip production to new standards – this requires from one to two million lari. The only thing that could be done before the production stopped was to make as much ointment as possible and create a reserve for a while, while the issue of restoring the production of Turmanidze’s miraculous ointments would be decided.
Turmanidze ointment is something that you can bring from Georgia for yourself or as a useful souvenir.
Website: http://turmanidze.ge